After our company switched to Schulte, our revenue per cutter went up 33%. We were getting paid by the acre so we were always worried about production and cost per acre. We were having problems with competitive cutters. We tried the Schulte cutters and it didn’t take us long to figure out that it was the cutter we wanted. We didn’t realize how bad our previous cutters were until we put a Schulte on the ground. We think the Schulte cuts better period. It’s unbelievable the quality of cut that we can get at what we would call a high rate of mowing speed. We get paid by the acre so productivity is a big deal for us, ground speed is a big deal for us.

“I’ve even had our neighbours think we had seeded a drought resistant canola because the crop looked so much better in areas where the SoilStar DHX-600 was used. The disc harrow seemed to bring the moisture to the surface for better germination. The difference looks like approximately 30% better crop yield using the SoilStar, wish I would have used it on all of the crop! ”

“We ran the Schulte SoilStar on about 3000 acres in a dry spring on our farm near Yorkton, SK. It was used for spring residue management from the previous crops of wheat, canola and peas. With the same pass we created a really nice bed for seeding into. We were impressed with the perfect job this 60 foot machine could do, dialed in by raising and lowering the coulter discs independently of the heavy harrows. Where we worked the land we had 100% canola germination, and in areas where we didn’t use the disc harrow, it was down to 80. The machine also makes weeds germinate quicker in dry conditions, instead of waiting on the rain, allowing you to spray sooner. We’ve tried other units over the years and are glad we found the Schulte DHX-600 it’s the perfect fit for our operation” 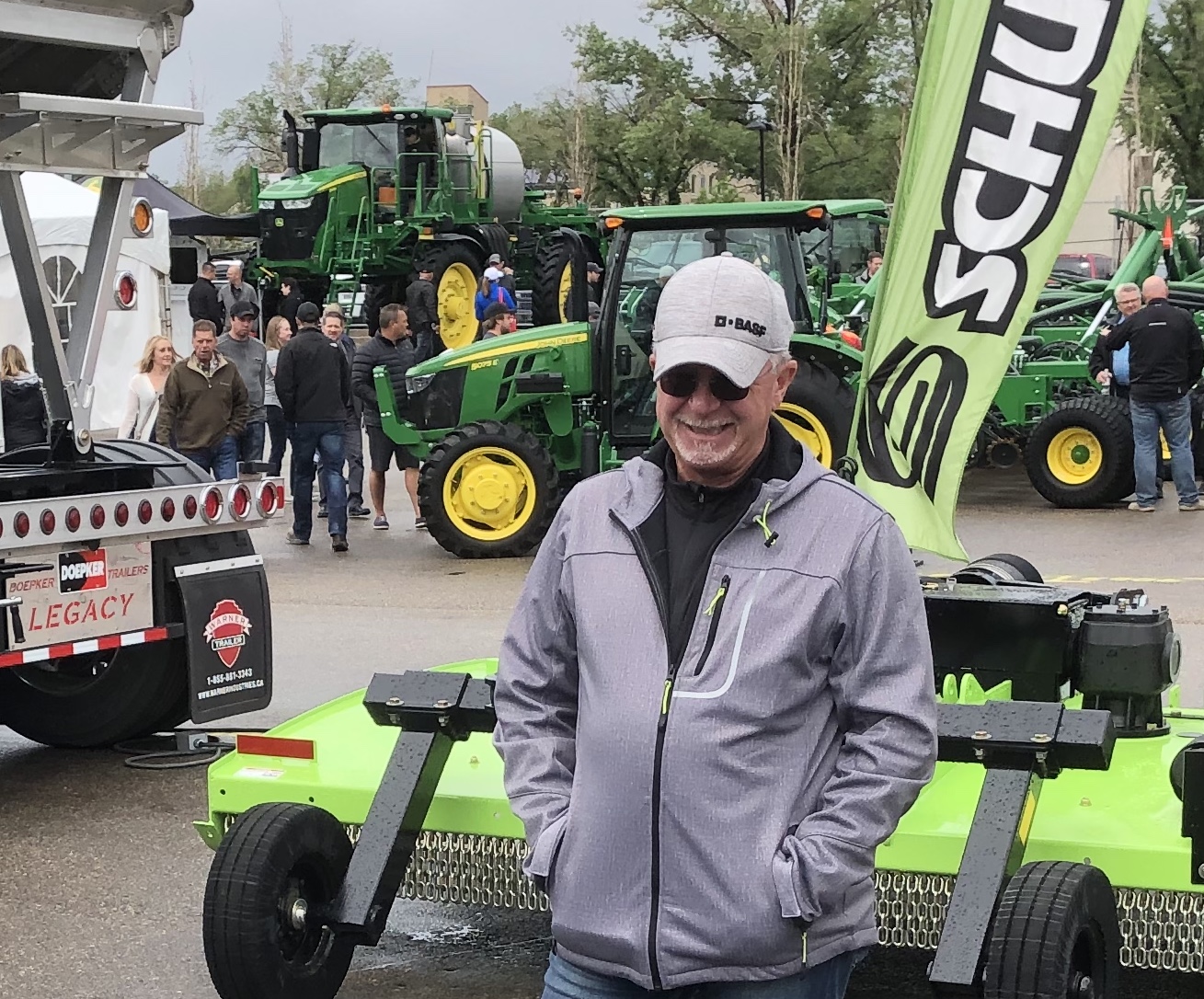 “Keeping the tractor out of the ditch reduces cuts and flats on the tractor tire and less tractor maintenance with the tractor running level. We can cut much closer to sloughs in wet years, no more getting stuck, no ruts in ditches to bounce over the next year. We haven’t rolled a tractor since we have started using the Schulte Flex Arm. When cutting brush the tractor is in the open and away from the trees. The operator can see what he is doing much better. We also use the Flex Arm when we are doing our back cut. We never unhook. Our new series 3 XH1500 is working very good. We can cut around 5 miles an hour.”

“I’m a rancher with a lot of mowing to do. When its time to mow, I need to go. Maintenance and downtime was something we always had with batwing rotary cutters. We purchased a Schulte 5026 26 ft. batwing mower 2 years ago. This cutter has been over a lot of acres and our down time and maintenance has only included 2 flat tires and greasing. We like Schulte mowers and have recently purchased a XH1500 Series 3 15 ft. cutter. We highly recommend Schulte mowers. They are just plain dependable.”

“Our bean crop yielded 160lbs per acre more because of crop residue management using the Schulte 5026 rotary cutter. In the Spring, where we had done the mowing, the ground warmed up faster, the beans came out of the ground faster and they grew better. Where it hadn’t been mowed we had a lower yield and higher disease. The fields that hadn’t been mowed are the ones we planted first and the beans which we planted last (where we mowed), within a couple of weeks, they were at the same stage as the earlier planted fields. When we cultivated In the fall we could do a good job of weed control and get right up to the beans on the fields we mowed, as trash and residue was cleared. We didn’t have a whole lot of mould on the beans, but where we did find it, it was in the fields that weren’t mowed. We also found we could till and seed quicker on fields we mowed.”

“We are a commercial mowing business. We purchased a Schulte XH1500 15ft. batwing mower this year. In 500 hours of use we have replaced the blades and a set of wing skids once. Blades on our other mowers rarely lasted 100 hours. It takes 2 1/2 hours to change a set of blades. Parts are an expense as well as down time. Our business is mowing not fixing. With our Schulte, our main cost is greasing. The Schulte is a level mowing, smooth running machine. Our employees prefer operating the Schulte. We feel it is worth its cost and would recommend Schulte to anyone.”

“The Schulte FX-180 performs great in all conditions. It has replaced some of my older mowers and handles all mowing conditions I can throw at it. It runs smooth with its 7ga spun formed stump jumpers and the 7ga domed deck sheds water and is easy to keep clean. This single domed deck ads extra room under the deck area for a noticeably improved and increased cut rate over my old mowers. I would recommend this Schulte mower to anyone looking at an extremely tough, fast/clean cutting and smooth running Flex Wing Mower. Schulte is a cut above the rest!”

“Our operators like the smoothness of operating the Schulte XH1500. Decks stay cleaner than other mowers. Our previous 15ft mowers experienced a lot of down time after 2 years of service. Down time kills us. We look for may years of service from our Schulte rotary cutter.”

“I am extremely pleased with the Schulte XH1500 cutter. I cut water levy’s around the Everglades in Florida and have put this Schulte mower through it’s paces. It has never let me down and and out performs any cutter have ever used before. The quality and strength of this cutter is second to none. I can cut faster with the deep deck and the domed deck keeps the mower clean and free of water which is important in Florida. I highly recomend a Schulte XH1500 to any one looking for a top quality mower.”

“I can travel at least 1 mile an hour faster than I could travel with the series 2 cutter. I like the Easy to clean the deck. I Have used the Flex-arm for 4 years. If I had to go back to cutting without the Flex-arm I would not be operating the cutter.”

“We have 1260 Acres of grass to cut (with the Schulte 5026 26’ cutter). It’s very, very nice, it’s cut our mowing down quite significantly. What used to take half hour to forty five minutes for a lap, it’s now taking seven to eight minutes. It’s greatly increased our production as far as maintaining the airport property goes. It looks like it was cut with a lawn mower, it’s not a fine cut but it looks like a manicured yard. It’s definitely a hearty machine, we enjoy the product it’s a very good product”. 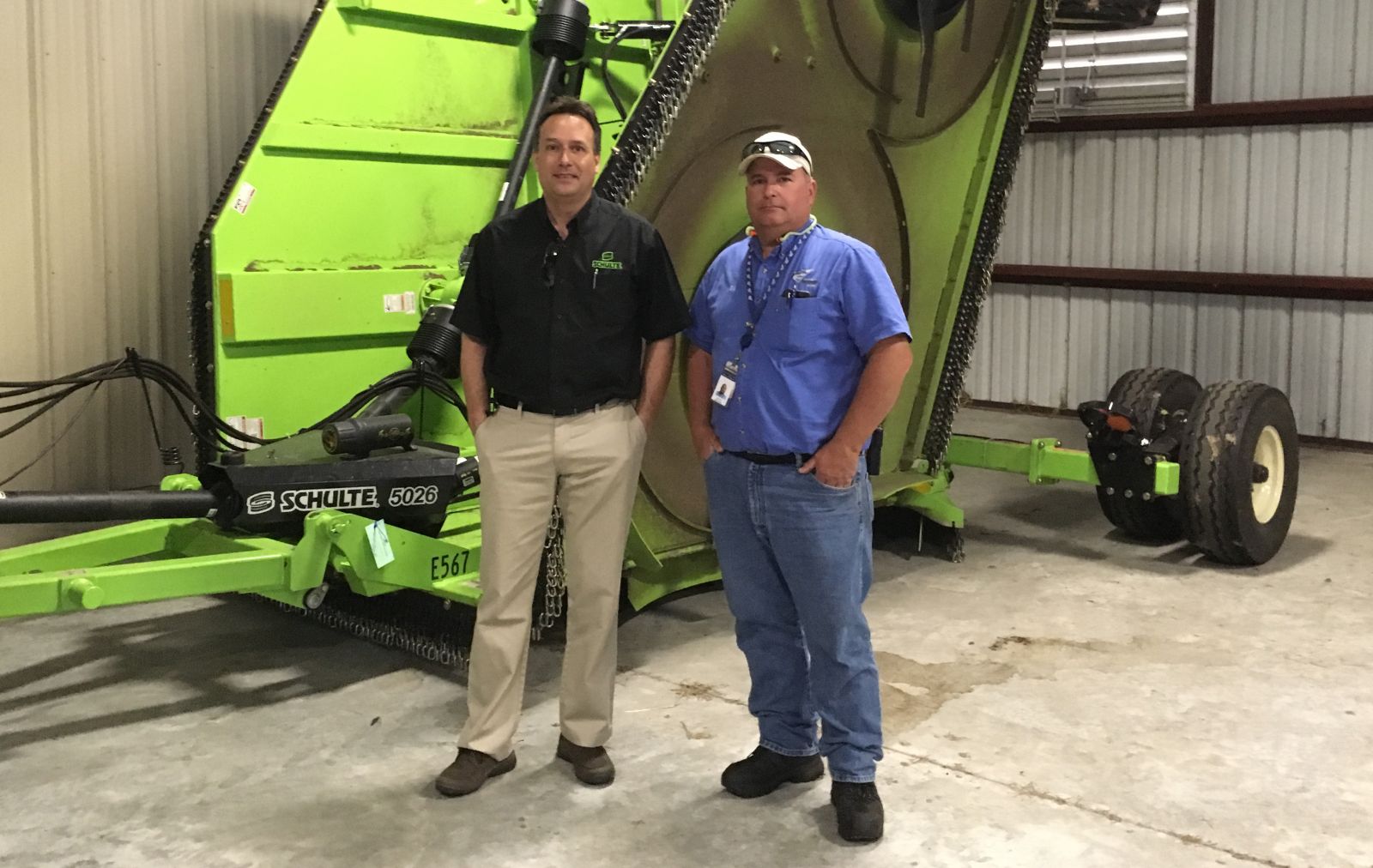 “We are a 5000 acre Texas South Plain cotton farm. We purchased a Schulte 5026 rotary cutter 5 years ago. All of our cotton acres are shredded annually plus we mow a lot of CRP. Shredded or mowed material is evenly distributed. The machine has more than exceeded our expectations. Maintenance on our Schulte is minimal; a set of blades lasts well through a season. The Schulte 5026 is very operator friendly, which makes it easy for any of our operators to run the machine.”

“We have small snow removal business in South Lake Tahoe, CA. This is our first Winter using your blower. Your equipment has really increased our capabilities. We now do twice the work with half the effort.”

“Cat Challengers operating with the FX520 mowers. This combination works fantastic for us”

Close
We use cookies on our website to give you the most relevant experience by remembering your preferences and repeat visits. By clicking “Accept”, you consent to the use of ALL the cookies.
ACCEPT
Manage consent

This website uses cookies to improve your experience while you navigate through the website. Out of these, the cookies that are categorized as necessary are stored on your browser as they are essential for the working of basic functionalities of the website. We also use third-party cookies that help us analyze and understand how you use this website. These cookies will be stored in your browser only with your consent. You also have the option to opt-out of these cookies. But opting out of some of these cookies may affect your browsing experience.
Necessary Always Enabled
Necessary cookies are absolutely essential for the website to function properly. These cookies ensure basic functionalities and security features of the website, anonymously.
Obligatoire
Les cookies obligatoires sont essentiels au bon fonctionnement du site Web. Ces cookies assurent les fonctionnalités de base et les fonctions de sécurité du site Web, le tout de façon anonyme.
Functional
Functional cookies help to perform certain functionalities like sharing the content of the website on social media platforms, collect feedbacks, and other third-party features.
Performance
Performance cookies are used to understand and analyze the key performance indexes of the website which helps in delivering a better user experience for the visitors.
Analytics
Analytical cookies are used to understand how visitors interact with the website. These cookies help provide information on metrics the number of visitors, bounce rate, traffic source, etc.
Advertisement
Advertisement cookies are used to provide visitors with relevant ads and marketing campaigns. These cookies track visitors across websites and collect information to provide customized ads.
Others
Other uncategorized cookies are those that are being analyzed and have not been classified into a category as yet.
Необходими
Необходимите бисквитки са от абсолютна важност за правилното функциониране на уебсайта. Тези бисквитки осигуряват анонимно основни функции и функции за сигурност на уебсайта.
Necesare
Modulele cookie necesare sunt absolut esenţiale pentru ca site-ul web să funcţioneze corespunzător. Aceste module cookie asigură funcţionalităţile de bază şi funcţiile de securitate ale site-ului web, în mod anonim.
SAVE & ACCEPT